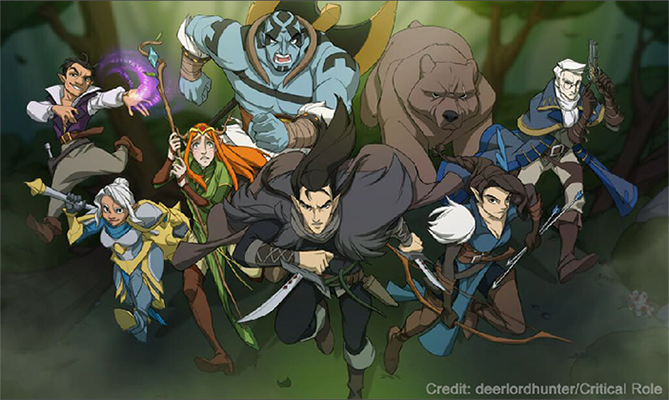 The Legend Of Vox Machina: Seek Social’s Day Off

The Seek Social team can’t wait for Autumn 2020 now, just imagine it – Storm Gareth will be over and done with, Brexit will be sorted one way or the other (hopefully), and roleplaying streamers Critical Role are scheduled to release an animated special!

For those of you not in the know, Critical Role are a group of voice actors and friends who also enjoy roleplaying (just like Seek Social in that respect). They stream their campaigns on Twitch, and the popularity of those streams has since seen Critical Role branch out into live shows, books, podcasts, even a series of comics.

The sheer life that a group of voice actors can bring to their roleplaying characters is awesome on its own,… And yet a good deal of inspiration for their diversification into other projects comes from the group’s fanbase. Dubbed ‘Critters’, they have always been a ready source of fan art, other creative projects and ideas. Add these together and it’s not hard to see why Critical Role are making great strides!

The logical next step for the group was to go back to their roots and take Critical Role into animation. In fact, it’s a dream they’ve had for some five years. A kickstarter was set up to fund the project and… Well, Seek Social can’t be the only people excited at the prospect. The pledges came rolling in and Critical Role reached their $750,000 goal in just ONE HOUR. The project has since reached 954% of its original goal (that’s not a typo), giving the group over $7 million after just ten days. It also gives them the 9th most successful Kickstarter of all time!

So what’s it all about?

Here’s what we know. The show is titled ‘The Legend of Vox Machina’, and as you might expect it is being voiced by Critical Role. Set before their first streamed roleplaying campaign it’s a prequel of sorts, and celebrity cameos have also been promised.

Seek Social really trust that Critical Role will get things right though, and a big chunk of that trust comes from the people they’ve trusted production to. Indeed, veterans of several animated series are involved in this project. Chris Prynoski’s ‘Titmouse inc.’, the team behind ‘Metalocalypse’ and ‘The Venture Bros.’ will handle the visuals. The story comes from Jennifer Muro, who has written for Marvel’s Spider Man’, ‘Justice League: Action’ and other animated series.

Now, their project was never intended to be an animated series… Only one 30-minute special was planned when the Kickstarter went live. However, with the support Critical Role have gotten that has changed. With their current funding six 22-minute episodes can be made, but that could certainly increase if enough money is raised. The even better news for us at Seek Social and other fans of Critical Role? There are already plans for more episodes, as well as one-off specials based on other roleplaying quests. All backers have to do to see them, is help Critical Role meet their stretch goals.

There is of course some awesome swag on offer for backers too, including soundtrack downloads, stickers, art prints, dice sets, playing cards and more, so if you’re as interested in the project as Seek Social are, why not head on over to Kickstarter and pledge?